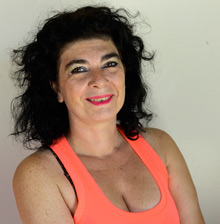 Argentina | 1970
Writer, poet and playwright. She teaches creative writing to children and adults and collaborates in various newspapers and cultural magazines in Argentina and Uruguay. She is one of the most prestigious and recognized writers in the Argentinean publishing scene.
keep reading

She has declared that she writes without any discipline but lashed by moments of creativity, which she undoubtedly knows how to use to her advantage. The proof of it is her vast literary production.

As a writer of books for children and adolescents, she was awarded the Highly Recommended Prize by ALIJA. As a playwright, she got the Prize Argentores 2005; First Prize from the National Theatre Institute and the Prize National Fund for the Arts, 2001.

Her short stories are present in numerous national and international anthologies. In the last years, a few of her plays have been performed on stage.