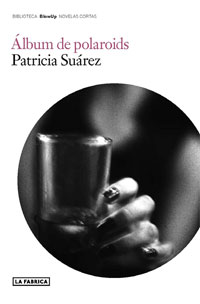 This short novel is about a man, Esteban Odessky, who is in his late thirties and feels terribly oppressed by his marriage, incapable of breaking up with his wife. He therefore decides to commit suicide as the only means to put an end to his relationship. However, once in the water, the fishermen throw a man overboard because they say he brings bad luck. Still alive, the man bumps into Esteban, and they both save their lives. This is the turning point in Esteban’s story, the beginning of his odyssey: he will escape to a big city to start a new life, he will come across fanciful and absurd characters. On the other hand, the novel returns to Leda, Esteban’s wife: her reactions once she acknowledges she has been abandoned, how she and her father hire a detective to find Esteban…

Undoubtedly this novel was written with deep love for authors like John Updike, Margaret Atwood and other writers who regard “the journey” as the starting point for a new life.

Polaroid photos often display a somewhat strange and hasty version of reality, of its colours and characters. In this short novel, Patricia Suarez’s characters and set-ups are precisely like this: they are all sort of “out of place”, avert from conventional colours; being each and every one of them absorbed in the task of “trying to rub back life into their feet”.