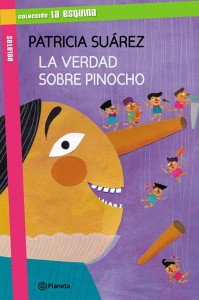 Pinocchio is not the only talented person in his family. Since this is story is inspired in a saying in Spanish that goes “At Pinocchio’s house everybody knows how to count up to eight …” , the other seven brothers of Pinocchio, who are professional singers, appear in it.  They are called “The seven twigs of the song” and they are very angry with Pinocchio because he never mentions them in his book. This is why one of the brothers decides to tell the true story of the famous character. ¿Did you by any chance think that he was good hearted and generous? Wait till you listen to what his brothers have to say about their Benjamin”.