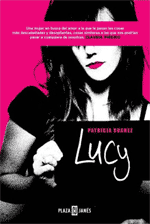 Novel | Chick Lit, 2010
Young Lucy speeds off to Italy to look for her husband, who has run away with another woman. When she finds him he tells her everything is over between them. Full of spite, Lucy has a romance with an Italian man she meets at the airport. Once in Buenos Aires they sleep together in Lucy’s house. At daybreak the stranger disappears and Lucy, who thinks he has left to buy croissants, is woken up by three knocks on the door by the Police to find out that the Italian is a Mafioso who has landed in Argentina with the assignment to murder someone. Lucy is regarded as his accomplice and is taken to the police station.

Following this, the plot focuses on Lucy’s experience in prison, where she is surrounded by three policemen that are like a host of miracles: the inspector, who suffers from migraines and hallucinations; García, a gluttonous officer; and Rolfo, a policeman who is addicted to disco-music. In addition, the Police request the help of a lawyer, Andrés Costa, an extremely depressive man…

In a bitterly humorous tone, Lucy draws us into the vicissitudes of a woman who always seems to be getting into trouble despite her endeavours to avoid it.

“This novel allows Patricia Suárez to show two of her best resources: humour and her ability to deal with dialogues”. Claudia Piñero