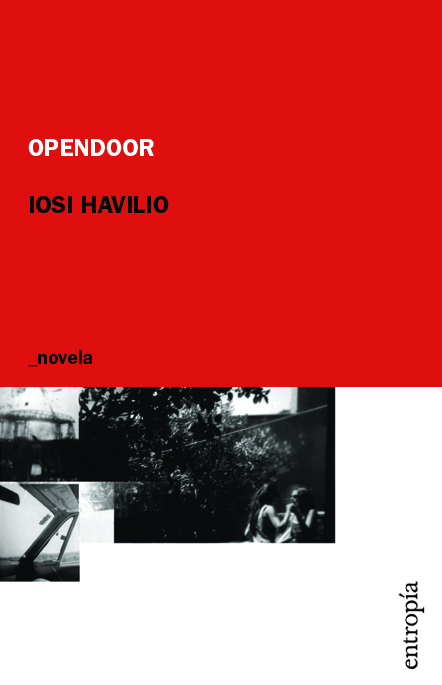 Movement between city and country is this novel’s driving force.

The main character is a young veterinary student, whose at once indolent and defenceless discourse weaves a soberly developed, exquisitely resolved plot.

In the first pages the narrator, who never reveals her name, introduces herself as the employee of a veterinarian who lives with another woman, Ada, who a short time later disappears in a mysterious fashion.

In order to diagnose a horse’s illness, the protagonist arrives at a field close to the Opendoor psychiatric settlement. There she meets Jaime, an almost old country dweller, and without thinking about it or wanting it, she starts a relationship with him. Opendoor is to become a place of belonging, where she mitigates her lack of ties and absence of her girlfriend.

Opendoor grows in the context of a plot where the contours of the past and future are veiled in favor of a present marked by the clash between the strange and the natural. Writing which skilfully manoeuvres among restrained acid wit and tenderness, realism and abstraction, precision of description and solidity in narrative.

This novel is something that surprised me. It does not adhere to any system of reading. It seems to appear from nothing. Beatriz Sarlo, Argentina

Havilio seems to look for a place where one can write without imitating anyone—though like Opendoor the place may be depopulated and unstable. Quintín, Argentina

Living, say some, is much easier than thinking life. This would seem to be the motto that almost unconsciously guides the steps of the main character in Opendoor, Iosi Havilio’s debut work. A novel which, in its sober construction, its restrained style reveals the hand of mature, balanced writing. Revista Ñ Argentina

The success of the project is reflected in the verosimilitude of the narrative voice. Jordi Carrión. ABC, España

Havilio documents the void and narrates it efficiently and whoever reads her knows the despair of the days and the observing gaze of the protagonist.…  Babelia, España

An ambiguous tale that verges on dark comedy … With skill and subtlety, the novel hints that a whole society might labour under an illusion of liberty. The Economist