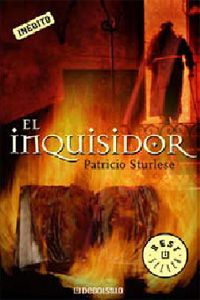 Novel Debolsillo. Random House Mondadori, 2007 550 pages
A furiously paced thriller set in the tumultuous late 16th century. An inquisitor is searching for the Necronomicon, a satanic book that could shake the very foundations of the Church.

An historic thriller with all the ingredients to be a huge hit: the sinister world of the Inquisition and witchcraft; a satanic book capable of bringing about the destruction of the world; an almost forbidden love; and a surprise ending.

In 1597, in the chambers of Pope Clement VIII at the Vatican, Angelo DeGrasso, Inquisitor General of Liguria, is received in private audience by the Pope, the Inquisitor General and a strange astrologer named Darko. They have just told him that a heretic named Eros Gianmaria, who has been brought from Venice, holds a terrible secret: he is the only person who knows the whereabouts of the last copy of a forbidden book, the Necronomicon and Angelo must use his skills to get a confession out of him. But there isn’t much time, since he must set out for the New World in a few days, on a mission that will not be revealed to him until he has already embarked.

Over the course of his adventure, Angelo will discover a plot of interwoven conspiracies. On one side, there is the Great Wizard’s sect that aspires to destroy Christianity, and which has held onto the book for that reason; on the other side, the Masons of Corpus Caria, a sect that is trying to recover the forbidden book and hide it from the Holy Inquisition; and on yet another side, those inside the Vatican itself, who are conspiring against Angelo because they consider him a potential heretic.

As he descends the stairs of Saint Peter’s basilica one cold autumn day, Angelo has a feeling that his life is going to change drastically. The unforgiving Inquisitor General of Genoa will not take long to discover that not even he is what he seems…

An enthralling novel that takes us to the turbulent end of the 16th century, in which the Catholic Church kills to defend the orthodoxy and maintain its power, in which covens of witches live in the Italian forests under the protection of Satan and the Moon, and in which everyone is willing to die for their faith — but which faith?