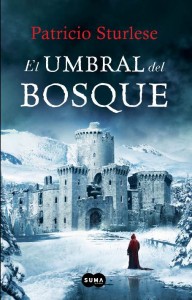 Novel Suma de Letras, 2012 496 pages
The threshold of the forest is a Gothic novel. It takes place in the 18th Century, primarily in the Nordic countries. The main plot line focuses on myths about drävulia (Scandinavian vampires) and on a curse known as the “night of 400 years” which put an end to the Kingdom of Norway and its royal line.

1604, the Castle of Countess Báthory, Kingdom of Hungary.

The novel’s leading character, Captain Pier Ugo Mameli, Venetian merchant, is hired by Countess Báthory to search for a chest to be found in the Gobi Desert of Mongolia and containing papers crucial for her kingdom. Mameli is to then transport it to the castle in secret.

As he is about to begin his journey, the Captain starts to have nightmares which bring back memories of incidents from his youth, nightmares which continue as he travels toward the Gobi. At the same time he begins to observe seemingly inexplicable events: banks of fog which suddenly come up at night, unidentifiable knocks on his door, the mysterious appearance of maple leaves…

The tension builds as Mameli arrives in Mongolia and succeeds in gaining possession of the chest. He sets out on the trip back to the castle in Hungary but halfway there he allows some seemingly defenseless young women on board his ship.

The ladies, members of the Nordic aristocracy start to take on more important roles on the ship and change the ship’s destination.

Beguiled by them, and particularly by Abigail von Karstein, the Captain is overcome by fear and confusion: Abigail is identical to the woman in his nightmares.

She visits him in his cabin at night. Unable to resist seduction, Mameli cannot see no boundary between what he dreams and what happens. Abigail and her companions are playing with his mind.

On board there is a series of murders which leave the victims’ bodies with strange wounds on their arms and legs. The Captain soon discovers that the beautiful women are not who they claim to be, but are in reality drävulias, Scandinavian vampires.

Impelled by the bloody murders taking place on his ship, Mameli decides to examine the chest he was bringing back for the Báthorys. Inside it he discovers a map which marks the hiding place of a book known as The Threshold of the Forest, written in the 13th Century by a Norwegian monarch. The book appears to be the cause of a secret dispute and also of a curse which attracts the drävulias, who covet it desperately.

Under siege on his own vessel, Mameli is forced by the drävulias to change course toward Norway so they can make off with the chest they want so much.

Indeed they do manage to carry it off but this sets off a chase which takes the story to the frozen lands of Scandinavia. The Captain must get back the chest, and following a trail that takes him through the towns and ancient cemeteries of Norway and Sweden and finally arrives at the very heart of the mystery: the discovery of The Threshold of the Forest.

The presence of Mameli and his men in the land of the drävulias causes confrontations among the vampires themselves who in their villages and hiding places suffer violent ambushes and ferocious attacks.

The Captain is in danger of losing not only the chest but his life, and his relationship with Abigail leaves him torn between desire and duty.

The threshold of the forest becomes a temptation for Mameli himself, who abandons his assignment and loyalty to his client and puts all his efforts into the mystery of  its content.

A bloodbath brings the story to an end and the final climax is one of forbidden love marked by death.

Video of presentation of the book El Umbral del Bosque (The threshold of the forest) Buenos Aires book fair, May 2012