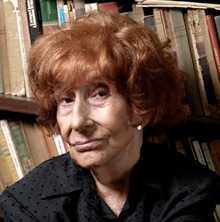 She graduated in Philosophy and Education Sciences from the National University of La Plata.

She worked as advisor in the Institute of Psychology and Re-education of Minors, where she met Eva Perón, with whom she collaborated and developed a very close friendship.

After the coup d’etat in Argentina, she went to exile in Paris in 1955.

El solitario (1948), her first book of poetry, was awarded the Prize Iniciación, which she received from the hands of Jorge Luis Borges himself.

In 2007, when she was 85, she wrote Las Primas and obtained the Prize New Novel, awarded by the newspaper Página/ 12. It was then when her work became well known.

Las primas, a novel praised by the critics and the readers, was published in Spain by Penguin Random House , got the Prize Otras voces, Otros ámbitos (Other voices, other spaces) and has been translated into Italian and French.

Aurora Venturini, the most extraordinary discovery in Argentinian literature in the latest years. Periodista digital