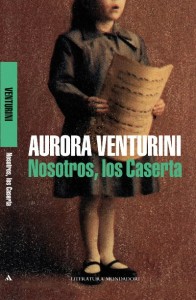 The man who could have been but hers was not has just passed away in a hospital in the arms of his legitimate wife. The image of this farewell in which the main character only participates as an intruder drives her to a trunk full of memories, photographs, objects and scenes of times long gone, which were not better. The memories of her childhood and her early adolescence, the travels to Europe might help her to give meaning to a whole life based on the hope of a love that has been evading her until death. The deluge of situations lived and remembered hat forms this novel has been untied by barely an impulse, an image.

We, the Caserta is exactly that, the candid, pretentious and useless effort to give meaning to a life through the ancestry, the genealogic tree and the more persistent memories.

Like all the novels by Aurora Venturini, We, the Caserta takes place in La Plata and also, like the rest of her work, the ghost of abnormality, the severity and the misunderstandings of the elders give a strange meaning to all the everyday actions.

“In Venturini’s writing there is a power that brands those who dare to read her. She gets into literature to leave a wound. Diario  Página 12