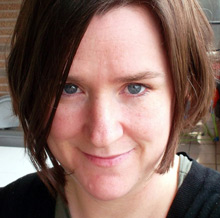 Spain | 1974
Born in Spain of British parents, she has an MA in Mental Philosophy from the University of Edinburgh.A writer, teacher, blogger and translator, her interests are focused on children’s literature and philosophy for children.
keep reading

Over the last ten years, she has been developing material to stimulate philosophical dialogue with and among children, using children’s literature and visual stimuli as prompts for discussion.

It is within the context and over the course of her experience with philosophy and children that the concept of visual philosophy for children arose. This concept and approach is now materialised in the Wonder Ponder project.

She is the author of the blog Filosofía a la de tres (filosofiaaladetres.blogspot.com), where she provides detailed accounts of the experience of her philosophy sessions with a preschool class in a state school in Madrid. The project is listed as an associated project of the Teaching Children Philosophy program of Mount Holyoke College in Massachusetts (USA).

She also writes the bilingual blogs Story Philosophy (storyphilosophy.blogspot.com), a blog of picture-book based philosophical discussions, and We Read it Like This (wereaditlikethis.blogspot.com), a children’s literature blog with reviews focused on the experience of reading aloud.

In addition to philosophy for children and philosophy of education, her philosophical interests focus on the Scottish and English Enlightenment and the relationship between language and thought.

She is the author of the translation of Inquiry into the Human Mind on the Principles of Common Sense. Madrid, Editorial Trotta, 2004, with an introduction and notes also written by her, of the 18th century Scottish philosopher Thomar Reid, which earned very positive reviews in Spain and the United Kingdom.

She has also translated Maurice Sendak’s classic work Outside Over There into Spanish, to be published by Kalandraka.