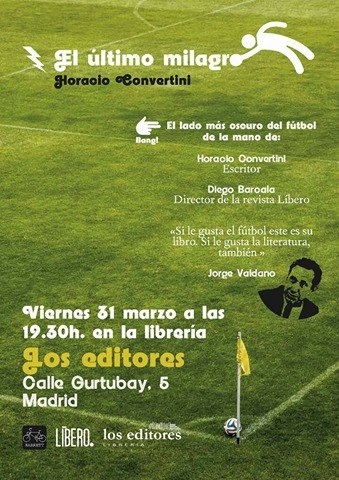 Deceptions, lies, fights, conspiracies, shady deals and murders encircling Argentinean football come to literature with The last miracle, a thriller which portrays the worse of the atmosphere surrounding the most popular sport in this Southamerican country.

The Racing Club, an important football club in Argentina, struggles for staying in the First Division. Its chairman is not qualified for the position, the coach spends more time with prostitutes than in the trainings, the best player wants to be sold to Europe, and the hooligans are always in the centre of the stage.

In this context, a group of Japanese scientists offer the club’s chairman to turn, thanks to technology, one of the team’s strikers into the best player of the planet: A biotechnological and unstoppable Messi. Then, the conspiracies and crimes will arrive. And the streets of Buenos Aires will witness a blood bath.

“Although it could be mistaken with the reality of Argentinean football, it is fiction”.

The last miracle is a thriller with hooligans and football miseries, written by Horacio Convertini with a colloquial style, impeccable and giddy, that will catch the reader in every page. Ray Collins, writer and jury of the Extremo Negro Award.

Convertini has a passion for narrating. His prose is a machine gun that fires heavy ammunition. Situations, characters and plot intertwine to form an unstoppable clockwork from which his readers will be unable to escape . Revista Eñe  Diario Clarín