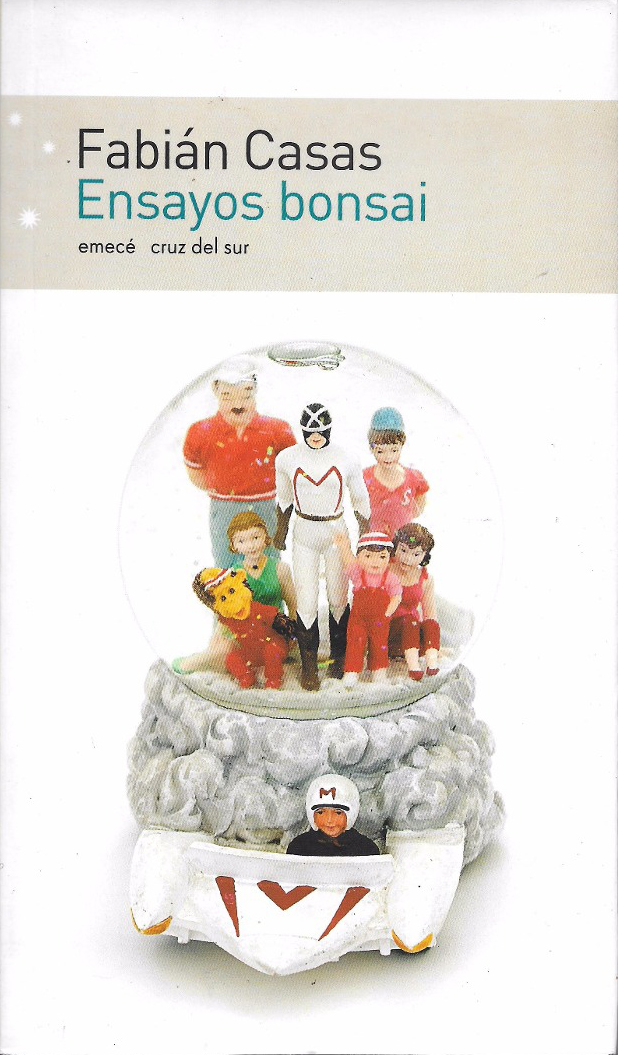 Essays | Planeta Argentina, 2007 | 227 pages
The paths  Fabián Casas sets out in Ensayos Bonsai are generally unpredictable: he can jump from Spinoza’s concept of power to an essay by Marcelo Cohen to Argentine letters and a bit further on to something Kurt Cobain found funny to the search for a shoeshop in a neighbourhood that was invisible until he needed it.

He can talk about  Borges’  El escritor argentino y la tradición, about Gombrowicz’ prologue to Ferdyduke and Arlt´s to  Los lanzallamas, all this topped off with his dog’s age-old instinct for conscientiously digging a well.

Football World Cups and rock stars, family and friends, the poetry of Eliot and Daniel Durand, film plots and the thoughts of philosophers…all of this has its part in these thirty-five essays.

There at the intersection of Oriental wisdom, rock ‘n roll, the ideals of messianic revolutionaries, the great poets of the Americas, and football emerges Casas’ writing: Zen Boedism.

“I am greatly stimulated by being told that one thing cannot be crossed with another”: Why not? Casas wonders.

“’Literature in Ensayos Bonsai is not a body that obstructs what is said, but a natural channel in which all this flow of poetry and life becomes written text…a book that reveals the story of a life and a world of generational readings”. Mauro Libertella, Página 12

“ The texts in this book include insightful reflections characteristic of the essay, evocations and dramatic events that could form part of a short story as well as traces and characters which are repeated, so we may well be talking about the missing links of a great future novel.” Josefina Ludmer